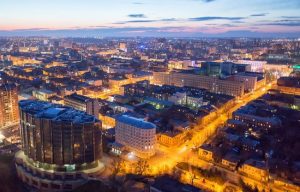 Rostov-on-Don is sometimes confused with Rostov the Great due to the similarity of the names of these cities, and it is in vain. Rostov the Great is a small, if very interesting, city not far from Moscow, and Rostov-on-Don can rightfully be called a metropolis, and indeed, perhaps, the main city of the whole south of Russia. This is where a lot of people come, both in search of work and in order to find new impressions – in this city there is something to see a curious visitor.

1. Rostov-on-Don is the largest of the southern cities of Russia, which is home to 1.2 million people. It is the tenth largest city in the Russian Federation and the 30th largest megalopolis in Europe.

2. Part of Rostov-on-Don, located on the left bank of the Don, the locals call none other than Levberdon (sometimes Leberdon). There are many recreation centers, hotels, restaurants, cafes and nightclubs.

3. Since the 19th century, Rostov-on-Don has been called the “Gateway of the North Caucasus”, because for a long time the country’s only railway line to the region passed through it. The expression “Rostov-Papa” as opposed to “Odessa-Mama” is also widespread.

4. Rostov has always played a crucial role in the life of the country because of its unique geographical location – the city has access to 5 seas (Black, White, Baltic, Azov and Caspian).

5. The maximum temperature for all the time of observations was recorded in Rostov-on-Don in August 2010 – 40.1 degrees Celsius.

6. On the territory of Rostov there are the ruins of ancient buildings erected at different times, up to 3 thousand years BC.

7. The modern city has arisen on the site of a fortress built to protect the border territories of Russia from the south by order of Empress Elizaveta Petrovna. The fortress never made a single shot.

8. In honor of the giant Rostov factory “Rostselmash” in the city in 1935, the country’s largest drama theater was opened with an auditorium in the shape of a tractor.

9. During the war, Rostov-on-Don was twice occupied by German troops. The city entered the top ten Russian cities most affected by the hostilities – about 12 thousand buildings were destroyed.

10. In Rostov, the Day of the city began to celebrate in 1864. Then this holiday fell on September 20, and now – on the third Sunday of the same month.

11. Twice a year in Rostov-on-Don, a solemn Arbor Day is held – the first mass planting of trees took place in 1910, and a century later this tradition was successfully revived.

12. In Rostov-on-Don, the Northern cemetery, which is considered one of the largest in Europe, is spread over an area of ​​360 hectares.

13. On Voroshilovskiy Prospekt there is an Avenue of Stars, on which since 2008 in the spring and autumn they are laying a star in honor of prominent citizens.

14. At the Theater Square in Rostov, a stele is installed in memory of the victims of the war, which depicts the Greek goddess Nika in a tent.

15. It was in Rostov-on-Don in 1929 that the first automatic telephone exchange in Russia appeared, capable of serving up to 6 thousand subscribers.

16. One of the city’s attractions is a public toilet in the basement of an old mansion in Gazetny Lane, set up in the former premises of the bohemian café, “The Cellar of Poets”. When the city lay in ruins in 1945, it was its only public restroom. She also became the first cooperative toilet in Rostov during Perestroika. The toilet was even proposed to be immortalized on a 200-ruble note, which the Central Bank intends to release.