The most dangerous airports in the world 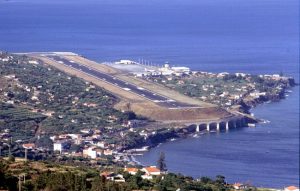 The airport is one of the most important infrastructure for the country. Sometimes a region is unable to locate an airport due to lack of space for its location, but since they are very important, sometimes you have to locate airports in very dangerous places. Your attention is the top airports located in the most dangerous places.

7. Lukla Airport (Nepal)
At one end of the runway is a cliff with another 2900 meter gorge. Lukla is a small airport in the city of Lukla in eastern Nepal. In January 2008, the government of Nepal announced that the airport would be renamed in honor of Sir Edmund Hillary, the first man to reach the summit of Mount Everest, he died on January 11, 2008. This airport is still quite popular, as Lukla is the place where most climbers begin their journey to climb Everest.

6. Madeira Airport (Madeira)
Madeira Airport, also known as Funchal and Santa Catarina Airport, is an international airport located near Funchal, Madeira. This airport has a sad history. In 1977, 131 people died aboard the TAP Portugal Flight 425, as a result of an unsuccessful landing. At that time, the airport had a short runway, and was also surrounded by high mountains and oceans. After the collapse of the 425th runway increased by 400 meters. And then in 2003 it was doubled up again, but since there was no place for increasing the runway, they built a bridge over the ocean, the bridge is held on 180 columns, each of which is 70 meters long.
Thanks to this architecture, the airport was named for many outstanding awards such as: The International Association for Bridges, Buildings and Structures (IABSE), the outstanding Oscar award for engineering structures in Portugal.

5. Barra International Airport (Barra)
Barra is the only airport in the world where airplanes land on the seashore. Barra is located on the wide beach of Traigh Mhor, on the island of Barra, on the Outer Hebrides, Scotland. If you want to get there, then you need to get on a plane that flies to Bar only from Glasgow and Benbecula.
The airport is literally washed away by the tide once a day, and if you get on a late flight, you can see several cars in the parking lot, which provides pilots with visibility, thanks to the powerful light, since this airport has only natural light.

4. Gustav III Airport (St. Barth)
Gustav III, also known as St. Barthelemy, is a public airport located in the village of St. Jean on the Caribbean island of St. Barthelemy. The airport is named after King Gustav III from Sweden. Sweden received the islands from France in 1785 (it was sold back to France in 1878). This airport serves small regional commercial aircraft. Most of the arriving planes take on less than twenty passengers, for example, the Twin Otter aircraft. A short runway located on a gentle slope ends right on the beach. It happens that the planes take off right above the resting, sunbathing people.

3. Courchevel (France)
Courchevel is a ski resort located in the French Alps, the largest ski resort in the world. This airport has a certain degree of severity in the aviation industry, as it has a relatively short runway, 525 meters long (1722 feet).
Who can land a plane or a helicopter at this airport, I can answer you, only a very experienced and trained pilot. The most popular appearance in the movie James Bond with Pierce Brosnan “Die, but not now”

2. Juancho E. Yrausquin (Saba)
Juancho E. Yrausquin Airport is located on Saba Island, part of the Netherlands Antilles. According to most pilots and experts, it is the most dangerous airport in the world. This is due to the very short runway, as well as the location of the airport among the rocks.

1. International airport “Juliana”
Juliana International Airport, located in the Caribbean on St. Martin, is also famous for its short runway. To land on it, large planes have to fly at a height of 10-20 meters above the sea and the beach, just above the heads of tourists. Despite this, there were no accidents or any serious incidents during the existence of the airport. And photographs of airplanes flying over their heads are often perceived as photomontage.