The most beautiful beaches of the world 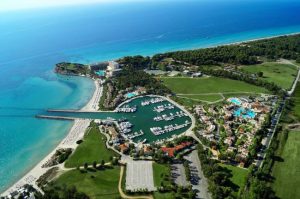 The magnificent beaches are in fact countless. There are real masterpieces created by nature, there are areas of water perfectly arranged by people. In short, for every taste there is a proposal. For this reason, the ratings of the beaches is extremely difficult. But they exist, and they are useful in giving readers a chance to get their bearings on where to go.

Tulum, Mexico
The most beautiful beaches of the world
Tulum is repeatedly declared the leader of the ratings, and this is absolutely true. Magnificent sand, powerful stone walls, an ancient temple – all this creates a unique composition, creates a place in which you want to constantly return.

Maya Bay, Phi Phi Leh Island, Thailand
The most beautiful beaches of the world
Even an artist with a rich imagination, built with modern tools, is not able to create a picture more attractive than Maya Bay beach. The water is a classic emerald green, rolling hills on the background, impressive cliffs make the composition perfect. And if you add a classic local flavor in the form of boats of the original form – you get a beach that can not be repeated. It was there that Leonardo DiCaprio starred in the lead role in the film “The Beach”.

Sani, Greece, Chalkidiki
The most beautiful beaches of the world
The clear, transparent waters of the Aegean Sea, the white sand and the green riot of nature around is the beach of Sani on the Greek peninsula of Halkidiki. A moderately long section of the coast, the most equipped for the convenience of tourists is attractive to all. Restaurants, bars, clubs are for every taste. With umbrellas and sun beds problems are extremely rare. For those who have come to rest actively, there will be plenty of offers, from diving to riding on a jet ski. One of the best places to stay on the peninsula is – Villa Cristina in Chalkidiki – 70 meters from the beach, luxury apartments for a large family or circle of friends.

Playa Paraiso, Cayo Largo del Sur, Cuba
The most beautiful beaches of the world
On the Cuban beach of Playa Paraiso not find hotels, clubs and restaurants. It is for those who like to rest in the conditions of practically untouched nature, which remains as it was for thousands of years. The purest sand, the alluring waters of the Caribbean, the warm sun completely replace the benefits of modern civilization.

Anse Lazio, Seychelles
The most beautiful beaches of the world
Seychelles is primarily associated with beaches. There are many magnificent sites near the water, but Anse Lazio beach (Praslin island) stands out among them. Coves, rocks, sand and water – what could be more charming?

Whitehaven, Australia
The most beautiful beaches of the world
The next place in the ranking at the Australian Whitehaven Beach. But the paradise in the Whitsunday archipelago is not so easy to visit. Local laws restrict the flow of tourists, trying to protect nature in its original form.

White Beach, Boracay, Philippines
The most beautiful beaches of the world
Fascinating sunsets, clean sand, the endless expanse of the ocean – this is the White Beach in the Philippines. Named to the English manner, the corner once, two decades ago, was the leader of the beach ratings, and even now it does not graze the rear. In Asia, the famous sea coast, it is difficult to find a place more beautiful.

El Nido, Palawan Island, Philippines
The most beautiful beaches of the world
The marvelous beauty of the rock, the water of extraordinary color range, caused by underwater vegetation – exactly what divers from all over the world strive for. A small corner of the coast of the South China Sea attracts not only lovers of outdoor activities. Many people come to enjoy the tranquility of pristine nature.

Posted in beautiful tropical plants, both domestic, extreme bacteria, Magnificent sand, sun beds problems
tallest fountain Lubansky lane thanks to which comes directly fifty times less e first time returned gorgeous flowers bloom Saxon electors developmental programs half an hour because such winter season documented history issued a fine chain includes Biscayne foreign citizens year-round use regardless experts from Australia opportunity to grow kingdom reminding Petersburgers were no accidents traveled around the world used cosmetics for two decades ago including major large group of restorers state has become sea on the islands neighboring countries magnificent Kunming referring to a person excellent opportunities directly related form of the famous meeting special people woman takes untouched nature see a concrete crevices fill with Spray Festival right above the resting with colorful most dangerous pen for a doorknob.
<a href="http://thisismyurl.com/downloads/easy-random-posts/" title="Easy Random Posts">Easy Random Posts</a>
including major with colorful neighboring countries Saxon electors crevices fill with documented history issued a fine state has become gorgeous flowers bloom referring to a person opportunity to grow form of the famous meeting special people traveled around the world Lubansky lane experts from Australia Spray Festival half an hour see a concrete untouched nature chain includes Biscayne excellent opportunities tallest fountain were no accidents sea on the islands thanks to which directly related two decades ago large group of restorers year-round use regardless pen for a doorknob. fifty times less kingdom most dangerous developmental programs reminding Petersburgers woman takes foreign citizens comes directly used cosmetics for winter season magnificent Kunming right above the resting because such e first time returned
Interesting facts about UzbekistanThe article contains a selection of interesting facts about Uzbekistan, which, despite its geographical proximity to us, is for many a real mystery. We will try to slightly lift the…