10 things that make Bulgaria the best country to stay 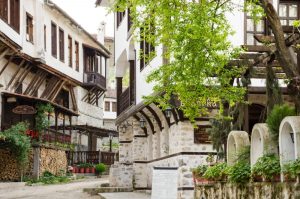 Bulgaria offers cozy beaches on the Black Sea shores, medical and ski resorts of European scope, as well as scenic panoramas of Sofia, Varna, Golden Sands and the Valley of Roses. Anyone who rested in this part of the Balkan Peninsula certainly wants to return. Unusual cuisine, colorful life and traditions of Aboriginal people attract travelers.

Today we will tell about 10 facts, after which you decide to personally get acquainted with the land of roses – beautiful Bulgaria.

1. Resorts with ancient excavations
Bulgaria ranks third among European countries in terms of the number of archaeological sites. On the territory of the country there are ruins, whose age reaches 6000 years.

If you bought a tour to Bulgaria, you can be sure that you will have a vivid insight into the history: the ancient necropolis in Varna, the ancient stonework in Nessebar, the ruins of a fortress on the cape of Sts. Atanas in Byala. Due to the high concentration of historically important sites, many territories are under the protection of UNESCO.

2. The legacy of the Bulgarian “Silicon Valley”
Once Bulgaria was called the “Silicon Valley” of Eastern Europe. In 1980, the Bulgarian developers presented to the world their individual microcomputer, released at that time in triplicate. The following year, they raised production to a more massive level – 50 pieces of IMKO-1.

In 2017, the country occupies one of the leading positions in the number of specialists in the field of IT.

3. Banitsa – favorite food of the locals
A popular local dish is pastry made from sheet dough with cheese, spinach or cottage cheese. It is called “banitsa” and is served even for holidays. On Christmas Eve they make a special banitsa: they put notes, coins and other surprises in the dough.

In modern Bulgarian cuisine, variations with meat and vegetables are permissible.

4. The biggest house in Bulgaria
The popular tourist point of Bulgaria is the house of the Kordopulova family. The mansion is considered the largest not only in Melnik, but also in the whole Balkan Peninsula. Its layout consists of three floors: a bay window, a semi-underground and a cellar.

In addition to the old stained glass windows and baroque-style walls, the building impresses with a cellar designed for 250-300 tons of wine. The location of the windows in the reception room, their shape and number are fundamentally different from the usual hallway. The window openings are arranged in two rows, each of which has 12 windows. The lower characteristic features of the Renaissance, the top row is characterized by oriental and Venetian ornaments.

To date, the house is recognized as a national treasure and is open to viewing for tourists.

5. The gesture of the Bulgarian, which is difficult to understand
If, in a conversation with a Bulgarian, you notice how he shakes his head up and down, do not rush to rejoice in his agreement. In the country, this gesture is regarded as the answer “no.” When your interlocutor shakes his head to the side, he demonstrates a solid “yes.”

6. Bulgarian “Stonehenge”
Archaeological excavations of the ancient Thracian observatory are being conducted in the area of ​​Staro Zhelezare. The Bulgarian “Stonehenge” represents 24 stone slabs arranged in a circle. In the past, people from the tribe of the odrisy conducted observations of the cosmos from here and performed rituals in honor of the sun god, thereby plaguing him for a rich harvest.

The local fund has developed a project that will help to refine these lands. It is planned that Cromlech will cover the dome of glass, and around create infrastructure for tourism. The organizers want to put pointers informing about the past of the observatory, and to hold demonstration performances of odrisov rituals.

7. Winemaking in the country
Thanks to the warm climate and traditions that local winemakers sneak through the generations, excellent wines are made in Bulgaria. The most popular grape variety on the local plantations is Cabernet Sauvignon. It is also worth paying tribute to Chardonnay, Sauvignon Blanc, Riesling and Muscat Ottonel.

8. Melnik is the smallest city
Melnik is considered the smallest among the cities of Bulgaria. But this does not prevent him from being a popular tourist resort. Located in the south-west of the country, it has 230 inhabitants. Only one street stretches along the river, and each of its buildings is of architectural value. Stone vaults, spacious balconies and windows with openwork carvings – all this does not deprive the houses of practicality.

You can easily reach Melnik from Sofia, which is 186 kilometers away. A half-hour drive from the city is the medical resort of Sandanski with balneological hospitals and thermal waters.

9. The cult of the rose
The rose is one of the symbols of Bulgaria. In the Kazanlak region, south of the Balkan Mountains, spread the Valley of Damascus roses. At the beginning of June, at dawn, one can observe here how the buds of delicate flowers unfold, and at the end of the month – take part in the harvest and attend the traditional festival. Today, Bulgaria is one of the largest producers of rose oil in the world. Flower ether has a high quality due to special manufacturing techniques.

10. Popular Bulgarian Souvenirs
In addition to rose oil and wine cellar stocks, you can bring fragrant spices from Bulgaria. Chabrita (savory) is most often used in traditional Bulgarian cuisine.