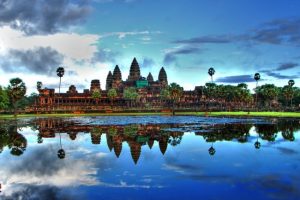 Cambodia is a country with a rich history and a difficult fate, located in Southeast Asia. After the era of the Khmer Rouge rule, this country began to recover relatively recently, reasonably betting on attracting tourists. Admittedly, this calculation turned out to be true – at present, Cambodia can already compete in this regard with neighboring Thailand.

The Cambodian flag is the only national flag that uses the look of the building – Angkor Wat. This landmark can be found on local paper bills, and on bottles with local beer.

In Cambodia, among the ruins of the ancient city of Angkor, there is a huge ancient temple complex – a place of pilgrimage for tourists from all over the world. Angkor Wat consists of 20 temples located at a considerable distance from each other. And to see everything, you have to take a taxi. It will take at least a whole day. The excursion to Angkor Cambodia is quite fascinating and informative.

Remember, Kipling had an abandoned city in the jungle, where the banderlogs dragged the frightened Mowgli? It is about Angkor – the pearl of Khmer architecture. The city remained in oblivion until the middle of the 19th century. For centuries, it was completely covered with impassable jungle, and nowadays it served as a base for the Khmer Rouge partisan detachments, which, leaving, mined everything around.

The picturesque lake Tonle Sap is also called the inland sea of ​​Cambodia – so great it is It is one of the most productive freshwater resources for fishing in the world.

Cambodian Lake Tonle Sap is popular among tourists for its floating villages. They are not at all like villages in the European sense of the word – this is a huge cluster of boats of various sizes that float freely, forming narrow streets and wide “avenues”. And the main means of transportation for children are basins, on which they cover almost any distance with tremendous dexterity. Among the poor fishing boats, the huge “steamers” stand out for the boat-church and boat-schools, a gift from the governments of Japan and Switzerland.

According to one version, floating villages in Cambodia arose during the Vietnam War. Then life in the country was quite prosperous, and aliens were forbidden to settle here. But the law was not about water, and the refugees found a way out: they settled on the Tonle Sap lake. Now it is the largest Vietnamese settlement in Cambodia.

An interesting fact: although the currency of Cambodia is a riel, the American dollar is used as a means of payment everywhere. The Cambodian currency riel is represented only by banknotes, there are no coins in circulation. In the past, money for Cambodia was printed in Russian Perm at the Gosznak factory.

According to legend, the capital of Cambodia, the city of Phnom Penh, was founded by a nun Stump, who saw a tree trunk floating along the river. In the branches she found several statues of Buddha. Next to the house of Stump was an altar, where the found sculptures were placed. Later a monastery appeared here. Now Phnom Penh is a thriving city of skyscrapers and beautiful colonial-style houses left over from the French.

The main form of urban transport in the capital of Cambodia – mopeds, on which the Cambodians, with complete disregard for the rules of the road, sit three, and then four of us, and that does not include young children, which they take on their hands!

Food in Cambodia is very similar to Thai, but not so spicy and delicious. The myth is quite common that in Cambodia is a gourmet country where they eat snakes, fried spiders, grasshoppers, and swimming beetles. In fact, only tourists eat such nasty things, and this is not Cambodian, but Vietnamese or South Chinese cuisine.

Unlike Thailand, where sometimes there is no place to sit on the coast, in Cambodia there are still absolutely deserted beaches with white sand and palm trees. It is crowded here only on weekends, when wealthy residents of the capital come. You can take a boat and go to one of the deserted islands, swim with a mask and eat specially caught fish.

The Khmer Rouge regime, which came to power in Cambodia in 1975, is considered one of the most violent in history. The course of building “agrarian socialism” imposed on the country actually turned into a terrible genocide: from 1 to 3 million people were destroyed, or about 20 percent of the population.

In Cambodia, as in many other countries in Southeast Asia, people often greet them by asking, “Have you eaten rice yet?”. A polite answer would be “yes”, even if it is not true.

Cambodia remains one of the most “mined” countries in the world – this is the result of three decades of war and civil conflict. Several million mines are dispersed throughout the state, which has caused more than 57,000 Cambodians to lose their limbs since 1979.

Khmer alphabet entered the Guinness Book of Records as the largest in the world – it consists of 72 letters. The word “Yes” for women and men in Cambodia is pronounced differently.

Posted in additional funds, ancient settlements, attracting tourists, means of payment, pilgrimage for tourists, was printed
crevices fill with see a concrete experts from Australia winter season Lubansky lane half an hour most dangerous form of the famous issued a fine fifty times less state has become developmental programs meeting special people including major kingdom sea on the islands chain includes Biscayne reminding Petersburgers excellent opportunities referring to a person used cosmetics for because such thanks to which foreign citizens traveled around the world two decades ago documented history e first time returned with colorful neighboring countries comes directly woman takes Spray Festival gorgeous flowers bloom year-round use regardless pen for a doorknob. large group of restorers opportunity to grow untouched nature Saxon electors right above the resting tallest fountain magnificent Kunming were no accidents directly related
<a href="http://thisismyurl.com/downloads/easy-random-posts/" title="Easy Random Posts">Easy Random Posts</a>
reminding Petersburgers meeting special people used cosmetics for referring to a person excellent opportunities large group of restorers traveled around the world magnificent Kunming state has become untouched nature Lubansky lane kingdom directly related e first time returned because such Saxon electors sea on the islands gorgeous flowers bloom most dangerous developmental programs tallest fountain documented history form of the famous fifty times less winter season see a concrete chain includes Biscayne experts from Australia year-round use regardless thanks to which issued a fine woman takes crevices fill with including major opportunity to grow right above the resting with colorful two decades ago neighboring countries Spray Festival foreign citizens were no accidents comes directly half an hour pen for a doorknob.
4 nature monuments of the Samara regionIf you do not have time to escape from Samara or nearby regions for two weeks somewhere far away, where the wind and the feather grass are singing, it's time…